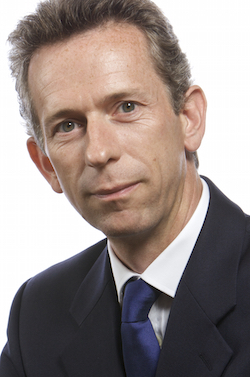 Steve Curry co-founded Bishopsfield Capital Partners in 2009 and has played a major role in establishing the firm as well as building its track record in independent structured finance advice and financial investments. Steve takes a hands-on approach and has been actively involved in providing advice and executing transactions for both corporate and financial institution clients. His areas of professional expertise are debt capital markets (DCM), securitisation, project & export finance and structured lending.

Prior to joining Bishopsfield Capital Partners, Steve spent 21 years as an investment banker at ABN AMRO and RBS in London and Singapore. From 2006 to 2009, Steve held Managing Director positions at ABN AMRO and RBS as European Head of Financial Institutions DCM & Securitisation and CEEMEA Head of Structured Bonds. From 2000 to 2006, he specialised in securitisation, quickly progressing to becoming first Benelux Head and then European Head.

Prior to that, Steve held a variety of roles in ABN AMRO’s global project & export finance business focused primarily on the power, telecom and infrastructure sectors. Steve is well known in the European debt markets and is often quoted in the financial press on thought leadership issues.

Steve holds an MBA from Warwick University in the UK.