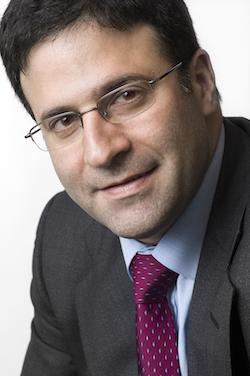 Mike Nawas co-founded Bishopsfield Capital Partners in 2009. He has been a driving force behind the early successes and expansion of the firm. Mike is a well-known and highly respected leader and practitioner in the European financial markets, and he brings his expertise, experience and relationships to our clients via his deep personal involvement in transactions. He is frequently cited in the international financial press.

Mike spent 20 years in ABN AMRO Bank’s debt practice both in Amsterdam and London, working across various finance areas including structured & syndicated lending, project, commodity & export finance, debt capital markets, emerging markets loans & bonds and, most notably, securitisation. He was appointed Global Head of Securitisation in 2003 and soon after that broadened his role to become Global Head of Fixed Income Capital Markets and Structured Finance, where he led ABN AMRO’s global origination business across the entire spectrum of credit products with a 750 person team in 25 countries.

Financial News, the Dow Jones publication, named Mike in 2008 in the top 10 of most influential people in European capital markets. After ABN AMRO’s global markets business was acquired by RBS in 2007, he became Global Head of Corporate & Structured Debt Capital Markets at RBS, before leaving in 2009 to co-found Bishopsfield Capital Partners.